Book your flight to Nice 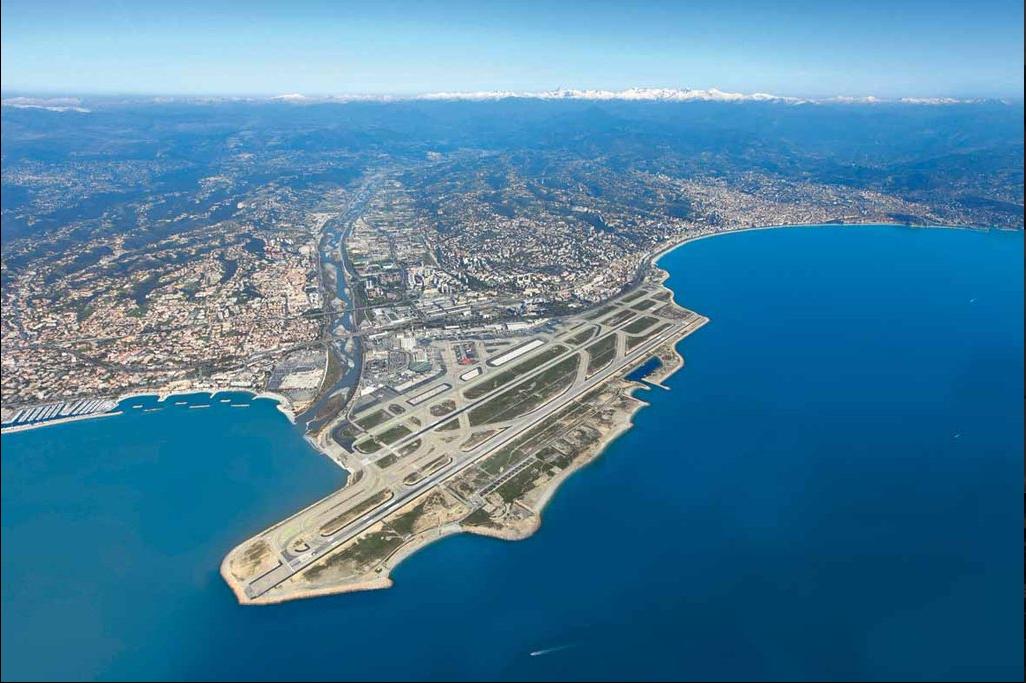 Nice Côte-d'Azur Airport, the third largest airport in France, is the ideal arrival point for a holiday in Nice. The airport is near Nice center, and facilitates your arrival at the Best Western Hotel Lakmi Nice and your departure. With 12.5 million passengers in 2016, Nice Airport offers more than 100 destinations in direct flights from Nice, more than 61 airlines to 38 countries. Nice Côte d'Azur Airport is developing a wide range of shopping and dining options to offer passengers maximum comfort and choice. On the spot you prolong your stay with the tasting of local specialties, or find the last souvenir gift to slip in your suitcase.

Nice Airport is about 15 minutes’ drive from the city center and the Best Western Hotel Lakmi Nice.
To make the trip from the airport to our 3-star hotel in the heart of Nice, several options are available to you:

- Take a cab or an Uber, for about 20 euros.
- Rent a car in one of the many rental agencies on the spot.
- By bus, take line 99 at “Terminal 1" or "Terminal 2" stops, and exit at the SNCF railway station stop. After a 5-minute walk along Jean Médecin Avenue, you will arrive at the Best Western Hotel Lakmi Nice.
- In 2019 two new tramway lines will both serve the airport, with the aim of improving its connection with the rest of the Greater Nice area.

Nice Côte d'Azur Airport proposes a wide offer for shoppers. At Terminal 1 you have the choice between 21 ready-to-wear boutiques, handbags, shoes, jewelry, accessories, perfumes... Among the most famous fashion brands, take a look at the latest collections of Baccarat, Hermès, Versace, Longchamps and Max Mara. At Terminal 1 you will also find local brands such as Saveurs de Provence, Fragonard or Riviera Chic. It’s ideal to slip a last souvenir gift in your suitcase.

Terminal 2 has 14 fashion, beauty and accessories stores. Recently a big multibrand shop opened its doors for the happiness of the fashionistas. A pure concentrate of big names in the fashion industry such as Armani Jeans, CK Jeans, Fula, Lacoste, Pandora, Petit Bateau, Villebrequin and many others. At Terminal 2 you will also find classic Duty Free shops, such as press relays, pharmacy and souvenir shops.

At Nice Côte d'Azur Airport, there are several dining options available to you. For an immersion in the Mediterranean cuisine, head to the "La Plage" restaurant of Michelin starred Chef Thierry Marx at Terminal 1, or "La Badiane" restaurant at Terminal 2 headed by Chef Guy Martin. If time is running out, but you want to succumb to the local cuisine on the go, visit "Chez Pipo" or "Pan Garni" at Terminal 1.

With 12.5 million passengers in 2016, Nice-Côte d'Azur Airport is the third largest airport in France behind the two Paris airports. Nice Côte d'Azur Airport offers 100 destinations in direct flights. 61 airlines land daily on the tarmac and serve more than 38 countries. In recent years, Nice airport has experienced an amazing growth with the opening of new low-cost lines. The airlines companies EasyJet, RyanAir and Hop! are the most represented. A good point for travelers, among the 5 largest airports in France, Nice is the airport that has the highest rate of low-cost flights (41%) according to the 2016 official report of the Union of French Airports.

Close to the city center and to the Best Western Hotel Lakmi Nice, Nice-Côte d'Azur Airport is therefore an integral part of your trip. In order to improve the accommodation capacity and to reduce waiting times, this dynamic airport continues to innovate by implementing frequently new projects. New destinations in direct flights will soon complete the offer of the airport with the line Nice-Shanghai in 2020 for example. Succumb to the exceptional view offered from your porthole during the landing, elected the 3rd most beautiful approach of airport in the world by the PrivateFly ranking among more than 200 destinations in competition in 2017.